When it comes to machine learning applications, the central artifact is usually a compiled model, which can be very large, and which has no notion of anything resembling a service architecture, dependencies, or anything else. It is essentially a ball of logic with inputs and outputs. Encoded within this artifact are several assumptions: it inherits the shape, support, and type of the dataset that trains it; it inherits the distribution function of the dataset that trains it ; and it often relies on the code or the frameworks that created it.

In other words, a machine learning system is Code + Data + Model. And each of these can and do change.

To ensure all team members work on a consistent state of the source code and to protect against accidental deletions or changes Software Engineering developed source code management systems (short SCM). The most commonly used SCM is Git.

Git is a widely used Version Control System (VCS) that lets you keep track of all the modifications you make to your code. This means that if a new feature is causing any errors, you can easily roll back to a previous version.

GitHub provides cloud based Git repositories and a web based interface providing a basic set of controls and reporting tools. IBM uses the enterprise version of the GitHub tool suite called GitHub Enterprise

When you make changes to a file and commit it, Git creates a snapshot of the complete filesystem at that point and stores that in its database. The snapshot also points to its predecessors or parents. Releases are usually identified with a metadata tag applied to an individual commit.

Git doesn´t need a server, all operations are local. Only when communicating with a remote repository like GitHub a server connection is needed. 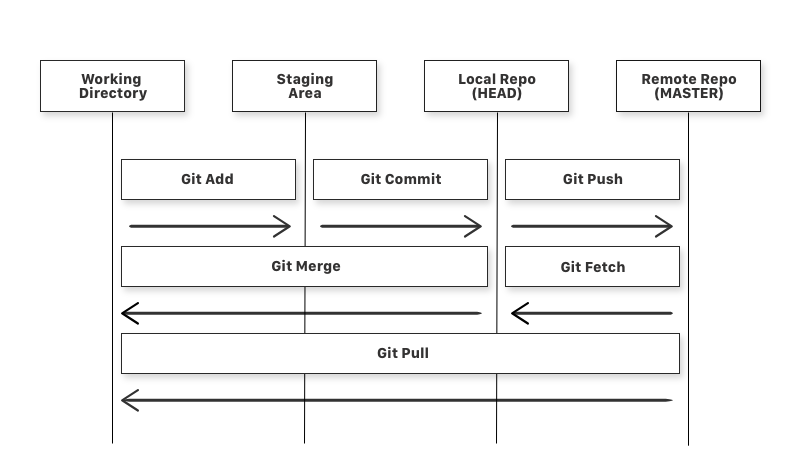 The repository or repo is a folder that contains all project files and the history of the revisions made to each file. The remote repo lives on a server like GitHub, the local repo is a copy of a remote repo on your local machine. Fellow developers will not be able to see changes until they get pushed to the remote repo.

When you commit a change, you save the changes you made to your files in the repo. To make those changes in the remote repo, you need to use the push command.

Add Files for the Commit

Add new files you want to include in the commit.

This command adds all new files in the next commit.

Push command allows you to transfer all the changes on your local repo to the remote repo.

The Pull command allows you to transfer all the changes from the remote repo to your local repo.

To create a new empty git repository use the git init command. It will create a repository at our present working directory. Remote repositories can be created on your github.ibm.com Account. Make sure to set the repository to private and only to public if its needed.

To get the current status of your repository.

You should use branches only if it is necessary and work on master so everyone has the same progress of the code. To learn more about the GitHub branching, visit GitHub Flow

Creates a new branch with the given name.

Switches to the given existing branch.

To connect with IBM GitHub Enterprise, you need to generate a SSH key and add it to the local ssh-agent. Be aware that if you enter a passphrase when generating the SSH Key, the passphrase has to be entered every time interacting with the remote repositories. After this, you have to add the new SSH key to your GitHub account.

Perform this GitHub Tutorial for setting up the SSH Key. Connecting to GitHub with SSH

Caution: Credentials
Never add credentials or other confidential / secret data to git! > If you committed something confidential by accident, you must roll back / delete the complete commit, which is quiet complex. Just deleting it in the next commit will not do the trick!

The general rule is to commit often and early. This usually causes small changes being committed, which makes resolving merge conflicts significantly easier or even prevents them from happening.

When code is committed git enforces a message to be added to the committed code change: There is no price for the shortest commit message! It is best practice to write a brief description of what was changed and why. It should be brief, but rather write a too long one than a too short one. Some project teams also include e.g. a issue or task ID to their commit messages to add more context to a particular code commit. Try to avoid using abbreviations, unless they are very common.

Sometimes larger code base changes are necessary to be made. Instead of doing these changes in one big bang (a.k.a. one large commit), the recommended solution is using a feature branch:

The advantage of this approach is that the feature development can work separately. The feature is not required to be implemented in one big bang. On the master you can continue developing other small changes or bug fixes.

Data has a number of important properties, but the two we care most about are its shape and its distribution. The shape can be thought of as a schema, i.e. a structured way of describing the properties of the space the data lives in, and its values, i.e. the way it is distributed over that space. There is no reason to expect that our data will always look the same, even if its underlying shape stays the same. We must always be retraining our models.

Getting Started with DVC

DVC aims to replace spreadsheet and document sharing tools (such as Excel or Google Docs) which are being used frequently as both knowledge repositories and team ledgers. DVC also replaces both ad-hoc scripts to track, move, and deploy different model versions; as well as ad-hoc data file suffixes and prefixes.

DVC usually runs along with Git. Git is used as usual to store and version code (including DVC meta-files). DVC helps to store data and model files seamlessly out of Git, while preserving almost the same user experience as if they were stored in Git itself. To store and share the data cache, DVC supports multiple remotes - any cloud (S3, Azure, Google Cloud, etc) or any on-premise network storage (via SSH, for example).

A list of all supported DVC backends can be found in the DVC documentation.

Since models are in the wider sense build-artifact. Therefore they are not added to git. In general adding them to git is considered bad practice since they are binary files and can be very large.

Even though you can add your built models to DVC, it is considered bad practice, since it you would mix the input data with the output model, which violates the idea fo separation of concerns.

Model versioning is important because machine learning algorithms have dozens of configurable parameters, and whether you work alone or on a team, it is difficult to track which (hyper)parameters, code, and data went into each experiment to produce a model. One such tool that you can use for Model versioning is MLflow.

The built models are usually uploaded to binary repositories for versioning. This is often done by wrapping the model with some Python code and uploading it as Python library. This has the advantage that the model can directly be consumed e.g. by other Python developers. It is also possible to upload and version only the model file.

This example code is hosted and versioned in the IBM Enterprise Github. It is a git based repository, so it can be operated with the standard git CLI. One of the standard components is a .gitignore file:

The file specifies, which files are not pushed from the local working tree to the remote. The example above shows, that generally files with endings .iml, .idea, .cache etc. are not synced with git. Usually these are local user specifc files, that are not relevant for the team or public. Typically this also includes password files, which are obviously not meant for the public.

The respective data is versioned using DVC. For more detail refer to the examples section of Chapter 7 - Data Management (Engineer).

The models in this examples are pushed to Nexus (binary repository) after training. There they are versioned like a python package, which can be imported and installed via pip. An exemplary implementation for that can be found in the web-service repository. The Pipfile in that repository shows the import of the oncology model:

The package is used as import in the src/oncology_service/serice.py file:

The packages includes the serialized model as well as the necessary code, which is required to get predictions from the model. The method to call a prediction is located in src/oncology_model/classifier.py (please refer to - Chapter 4 - Source Code (Engineer) for a description of the structure):

In this method, the user only needs to call the predict method with the respective tumor object as an input. As this code is included into the python package with the model, the user is sure, which interface to use to interact with the trained model.