IBM Z Open Editor and RSE API Plug-in for Zowe CLI (RSE CLI plug-in) can handle EBCDIC code page conversion mappings for MVS files. You can set an encoding default in the RSE profile, use an encoding tag with Upload and Download MVS commands, and use mappings files either provided by the RSE API host component or used at a project level. See this page with the list of all the supported code pagesopen in new window.

The RSE API Server provides the capability to manage mappings files that allow defining how MVS files should be converted when uploaded and downloaded. These mappings do not cover USS; we recommend and use in IBM User Build a .gitattributes file for specifying the USS mappings.

RSE CLI plug-in provides the ability to get a default mappings file, which is maintained by the RSE API server administrator, from the server that can be downloaded using the RSE CLI plug-in command zowe rse check conversion-mappings. You can make personal modifications to this file in the ~/.zowe/profiles/rse folder, and then have our tools use this mappings file automatically to interact with the server. The mapping is consistent with a similar behavior offered in IBM Developer for z/OS (IDz) via its user interface.

In addition to mappings files that are stored in the user's .zowe directory and used by the RSE CLI plug-in, ZAPP provides the same ability of defining mappings using the same schema, but offers YAML as additional syntax. This allows teams to share these mappings for their applications and make them part of the source code that could be stored in a Git repository or other SCM. ZAPP files can either be in YAML or JSON syntax; however, it is recommended to have your ZAPP file in one syntax only, not both, within the same project or directory.

Many commands of the IBM RSE API Plug-in for Zowe CLI have additional parameters for specifying a code page directly or specifying a mappings file to be used for computing the code page encoding.

For example, assuming the member SAM1 was written and stored on MVS using the IBM-273 EBCDIC encoding, you can work with it via the following commands.

The downloaded mappings file will be placed in ~/.zowe/profiles/rse/conversion-mappings.json. You can add your personal conversion preferences to this file and the updates will be automatically used by all your RSE CLI plug-in commands without the need to specify a command line parameter.

However, if you manage more than one such file, for example for different projects, or you even prefer defining such mappings in a ZAPP file, then you can specify the file to use with a command line parameter as well:

Tools such as the RSE CLI plug-in or Z Open Editor find mappings following these precedence rules with some rules applied to CLI only:

The JSON schema for defining RSE CLI plug-in profiles simply consists of an array of mappings and a default encoding to be used if none of the mappings provided apply. The mappings can be provided as a simple array called mappings of mappings objects in a JSON file or as part of a ZAPP profile with settings as shown in the diagram below. See examples further below. 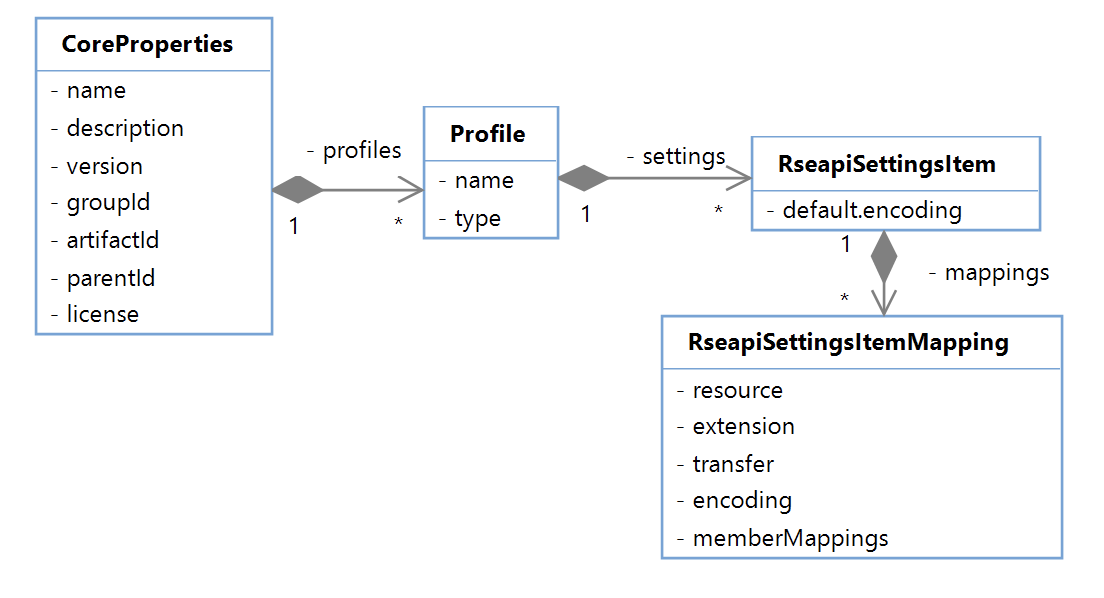 When reading these mappings the following validation and interpretation rules apply:

Resources can be specified following the rules defined in Step 5 of the z/OS Explorer docs for Mapping data sets and partitioned data set membersopen in new window.

There are two wildcards allowed: ** and *

The following shows a sample mappings file using JSON that you could place in your ~/.zowe/profiles/rse as conversion-mappings.json:

This file defines that files located in data sets containing the string .SAMPLE.COB in their fully qualified name such as USER1.SAMPLE.COBOL would be transferred as text assuming an IBM-273 EBCDIC code page (Austria/Germany) on MVS. Hence, downloading a data set member with an RSE CLI plug-in command or Zowe Explorer using an RSE profile would therefore convert the content by RSE API from IBM-273 EBCDIC to a UTF-8 file, as that is the format Z Open Editor requires files to be in. Uploading such a file would convert the UTF-8 back to IBM-273 EBCDIC. The extension property, which is currently only supported by the CLI, specifies that the downloaded data set member would be stored as a file with a .cbl file extension.

In addition to the default rule for **.SAMPLE.COB** data sets, you see a nested memberMappings subrule that provides a refinement: If the member name contains EIC as a substring then the file will not be converted from IBM-273, but treated as a binary instead. This allows you to use data sets with members of different types.

Furthermore, the example shows how members in data sets that contain PLI in their names would be converted using IBM-500 (Belgium/Canada/Switzerland) as well as that in all other cases the default conversion code page would be IBM-1047.

In a zapp.yaml file, you can specify the same mapping described in the previous section by defining a ZAPP profile of type rseapi. The zapp.yaml for this particular specification would contain text as follows:

Mappings files are not only used by RSE CLI plug-in commands, but also by Z Open Editor remote include file resolution operations. When you define a property group either in your ZAPP file or Settings, the retrieval of include files or copybooks will use mappings files based on the precedence rules defined above. For example, if you define mappings in a zapp.yaml file in your workspace, these mappings will be used. If you do not have a ZAPP file, but have a personal mappings file in ~/.zowe/profiles/rse/conversion-mappings.json, the personal file will be automatically used.

Zowe Explorer allows you to navigate your data sets and open data set members in the editor with a simple click. When you use Zowe Explorer with an RSE profile, conversion mappings can be used as well. To enable this, you need specify the absolute location of the mappings file to use in your user settings. The setting is called zopeneditor.zowe.defaultRseConversionMappingsFile. You can find it in the IBM Z Open Editor settings together with the other Zowe-related settings such as the defaultCliProfile. Conversion mappings defined in either a JSON-formatted RSE API user mappings file or a ZAPP file will override an encoding specified in a Zowe profile.

When using encoding and mappings files with the RSE CLI plug-in commands, logging will be written and found at ~/.zowe/zowe/logs/zowe.log. This log file will contain details about the encoding precedence that was used during upload and download of MVS files, the location of the mappings file if available, and the outcome of the encoding or transfer type that was chosen according to the previously-mentioned values.